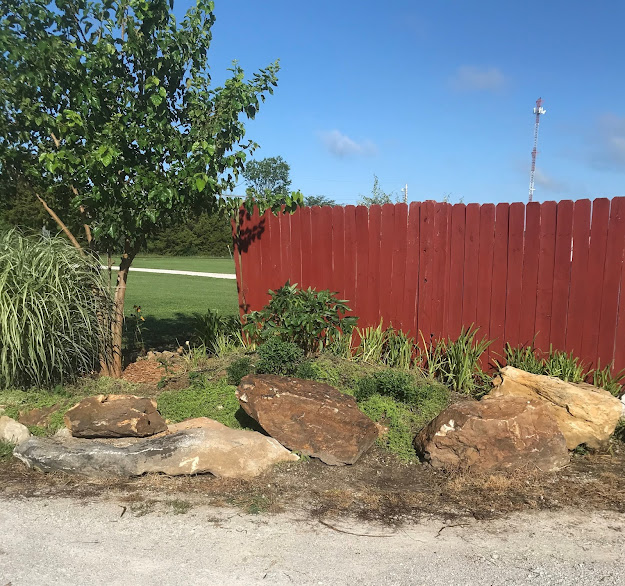 Never have my gardens been so cleaned up and weed free! This garden usually takes a back seat to the other gardens. The weeds that plague this garden are full of thorns and I once uncovered a snake in the tiger lilies, while I was pulling the dead leaves out.
This garden was brought about by me asking for some fill dirt. It was flat and rocky, not leaning towards cultivation. If you garden, you will know that I was hoping for about 20 bags of top soil. I am married to HeWho thinks he knows everything, though. He took the tractor to the empty field behind the bill board and scooped up what he referred to as "good, clean dirt". He surprised me with his gift of listening and providing what he was sure I had asked for.
I discovered my "gift" already hulking there and had no choice but to work with what I was given and learn to be more specific when I asked for things. You would think I already knew to be specific, given some of the "gifts" I have gotten over the years. That is another story for another day.
This good clean dirt was anything but. I pulled huge roots out of it and shoveled and mounded it into place, knowing full well that it was going to be a challenge ridding it of weeds over the years. I planted two tiger lilies, a peony I rescued from Walmart's clearance display and since it was late in the season, I planted daffodil bulbs and tulip bulbs, and topped it with mums, a lot of mums.
The very first spring had someone driving over my tulips. The big boulders were found on my property when we dug new sewer lines. They slowly appeared around my garden. They were nowhere near the size of the ones there now. Kevin found them and put them there after seeing how many times the smaller ones were driven over. I think of him when ever I work that garden.
The thing is that the huge boulders have not stopped drivers from cutting too sharp. Neither has the "WIDE TURN" sign. I could roll the smaller boulders back in place, but not these. I confess that I derive a small amount of pleasure knowing that the vehicle or trailer that hit the boulders hard enough to move them had to have sustained considerable damage. That knowledge is little comfort considering that the boulders are now on top of my bulbs. 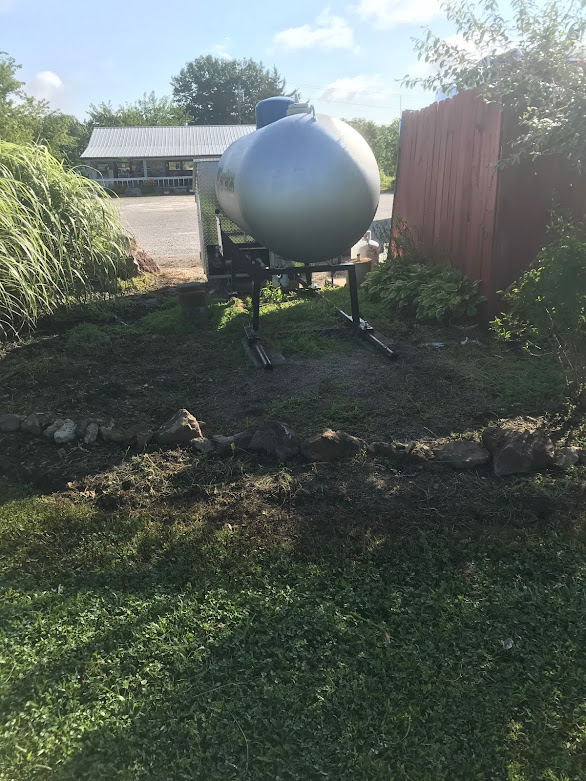 This is the garden on the other side of that fence that surrounds the dumpster area. This what I call the Gavin Garden. Gavin stayed an entire month with us the summer he turned 3. HeWho dumped a load of gravel there, telling me it didn't have any weeds. He was right, but the load was in the way of traffic. Gavin was my steady helper with his own little shovel and we moved it one shovel full at a time. Once again I employed mums to make it look like a garden. Gavin's mom arrived to pick him up and thought she would give her old mom a hand with the shovel.
Two scoops and she was done! She told Gavin to come inside with her to take a nap, that she didn't come here to work. Gavel kept right on shoveling, telling her that he didn't come here to nap! As much as I miss the 3 year old Gavin, I am enchanted with 16 year old Gavin. He is a sweet, considerate young man that I am so proud of!
Over the years the Tiger Lilies and Hostas have spread and some tall grasses added. A tree refused to die and the gardens look different. HeWho groans every time I start a new garden or plant a tree. I don't know why, since I will be the one to mow around them and it actually makes less grass for him to mow. Maybe he is tired of picking up top soil and mulch for me? He just buys it and brings it home, I am the one who lugs it around and spreads it. He loves a good excuse to go places an run errands! I am just being a good wife!
Posted by Kathy's Klothesline at 10:10 AM

I have no garden just lawn that often needs mowing

I can see how far those boulders went. I hope someone's axle didn't make it home.

Maybe you could add a metal fence with spikey decorations on the top around the rocks?

Some people simply can't turn without driving over something unless the space is as wide as a freeway. Sad to lose plants because of others inconsideration. Gavin sounds wonderful.

This post has made me feel all warm inside. Sure, the part about Gavin is sweet. But manly from the thought of those boulders doing their number on the vehicle that disturbed them!