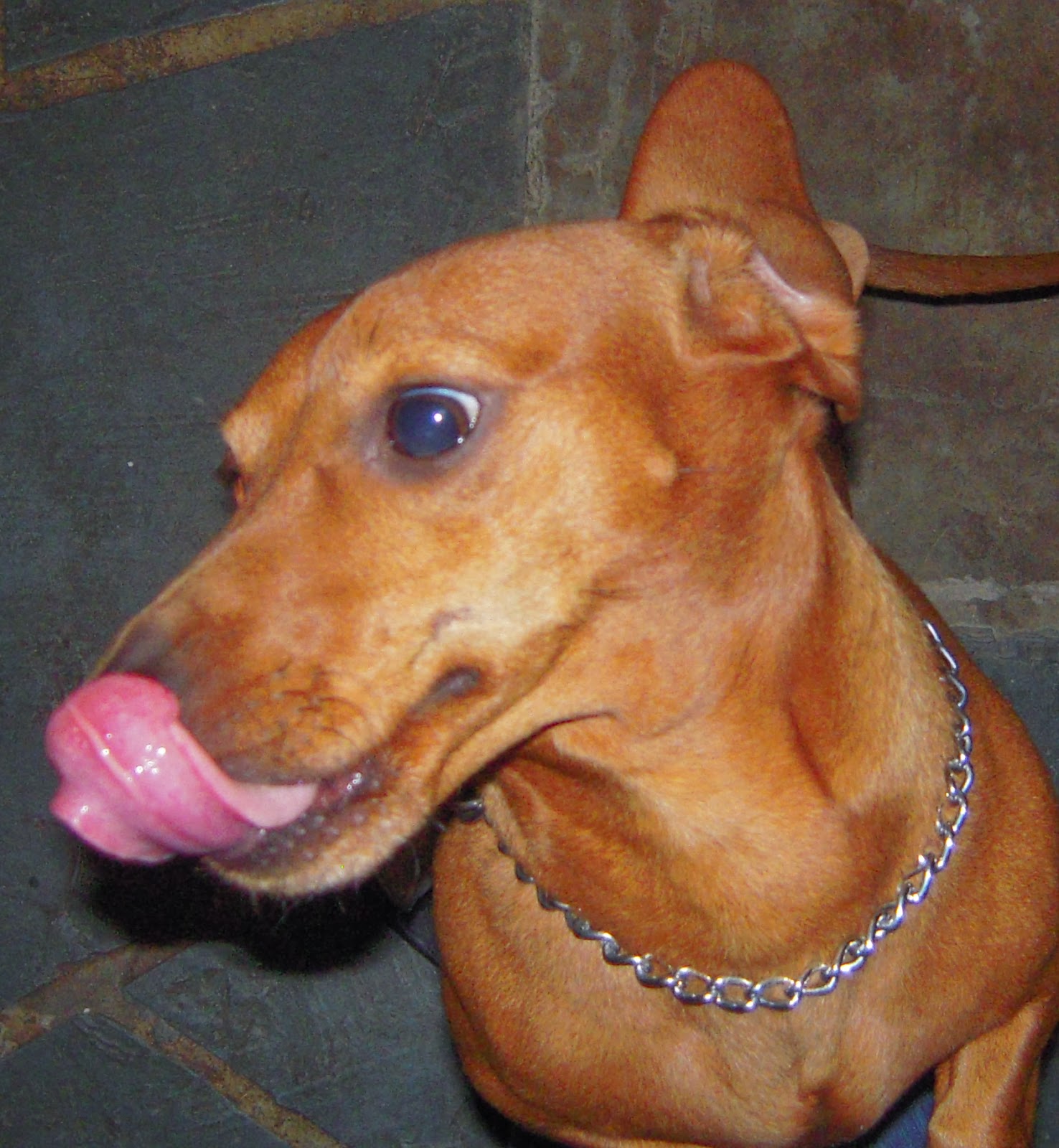 Pick me up, pick me up! I have to do this ever so carefully, using my right hand and arm. I am rewarded with such sweet affection, it is worth it!

No, the insurance card did not come. They assured me it was mailed last Friday. Should have been here Wednesday. I know they have outsourced many jobs, is my card coming from India? He Who is greatly annoyed is calling them as I write.

Let him vent some frustration. I feel the first tingling of the pain pill coursing it's way through my bloodstream. Mellow.

Okay, the fence did fall a third time yesterday under the influence of the mighty winds. We left it in the ground, waiting for the wind to stop. Last night we had to harness up the four leggers and tramp out into the cold. I chose the doxies. When they see me grab the leashes they stand patiently waiting to be hooked up. Wall-E hides and Toni Louise becomes hysterical, running in circles and leaping in the air. I left those two to He Who has two shoulders working properly.

I calmly walked my two out the door on the leads, behaving nicely. Wall-E escaped without a lead and Toni Louise took her master on a wild walk. My dogs proceeded to take care of business in a timely fashion, as did Wall-E. I managed to get my two along with Wall-E back inside while He Who was in charge of just the one dog lost his. She came to me when I called her and all was well. I am the dog master in this house.

The fence is back up today and I can now focus on ice cube trays. Yes, ice cube trays. My refrigerator has an ice maker, but it is not hooked up. My water is very hard, exceptionally hard. My fridge is an older model and does not have a water filter, so it is not hooked up. The apparatus takes up valuable freezer space, but I am a little scared to suggest removing it. But that is another story.

I use ice trays. Plastic ones. Cheap ones from the Dollar Tree. Now, we all know how to remove the ice, don't we? You flip the tray over and gently twist. The cubes fall out. He Who carries a huge Bubba Mug of Diet Coke everywhere he goes uses lots of ice. While I know it is insane of me to expect him to refill the trays with water and put them back in the freezer on the designated shelf, I did not expect to have to keep replacing them. He twists them with such force that he breaks them.

Since He Who was chauffeuring me while under the influence of pain killers a couple of days ago, we checked out the display of ice trays in WalMart. Hard to find, on the bottom shelf and somewhat dusty. Only two brands to choose from. The store brand was in a 2 pack and 97 cents. Rubbermade was packaged in singles and $1.97. Throwing budget to the wind I bought 2 of the Rubbermade trays. He Who loves his ice suggested 3 or 4, but the voice of reason triumphed and we only got 2. If they can hold up to the twisting of the Diet Coke maniac I will then purchase more.

Posted by Kathy's Klothesline at 2:04 PM

Our ice maker was totally destroyed ten years ago by grandchildren who would not learn how to dispense either ice or water properly. Two one hundred dollar repairs later we gave it up as a bad job and fill the bucket with cubes just as you do. There is a little justice in the system; the same grandchild who broke the levers has to fill the trays in order to have his ice water.

I can totally empathize about the ice trays. The salt from our water softener destroyed our ice maker 4 years ago and I'm still making ice the old fashioned way in trays.

Look! He's cleaning his nose so he can jam it in your mouth as you pet him and whisper sweet nothings.

Ice in any form, no matter how it's shaped...I must have ice in my drink.

We yanked the ice maker out of our new fridge the day it was delivered. There is a water line there, behind the fridge, but I don't want an ice maker. I will make ice when I need it and as I want it.

Our water is hard, too. I'm gathering yours comes from your own well? We have well water, too, even though it is a city owned well. People who have their own well around here are in dire straits this year. Water table is dropping by the feet as I type due to the drought. Just heard that new wells can cost as much $400,000 to drill.