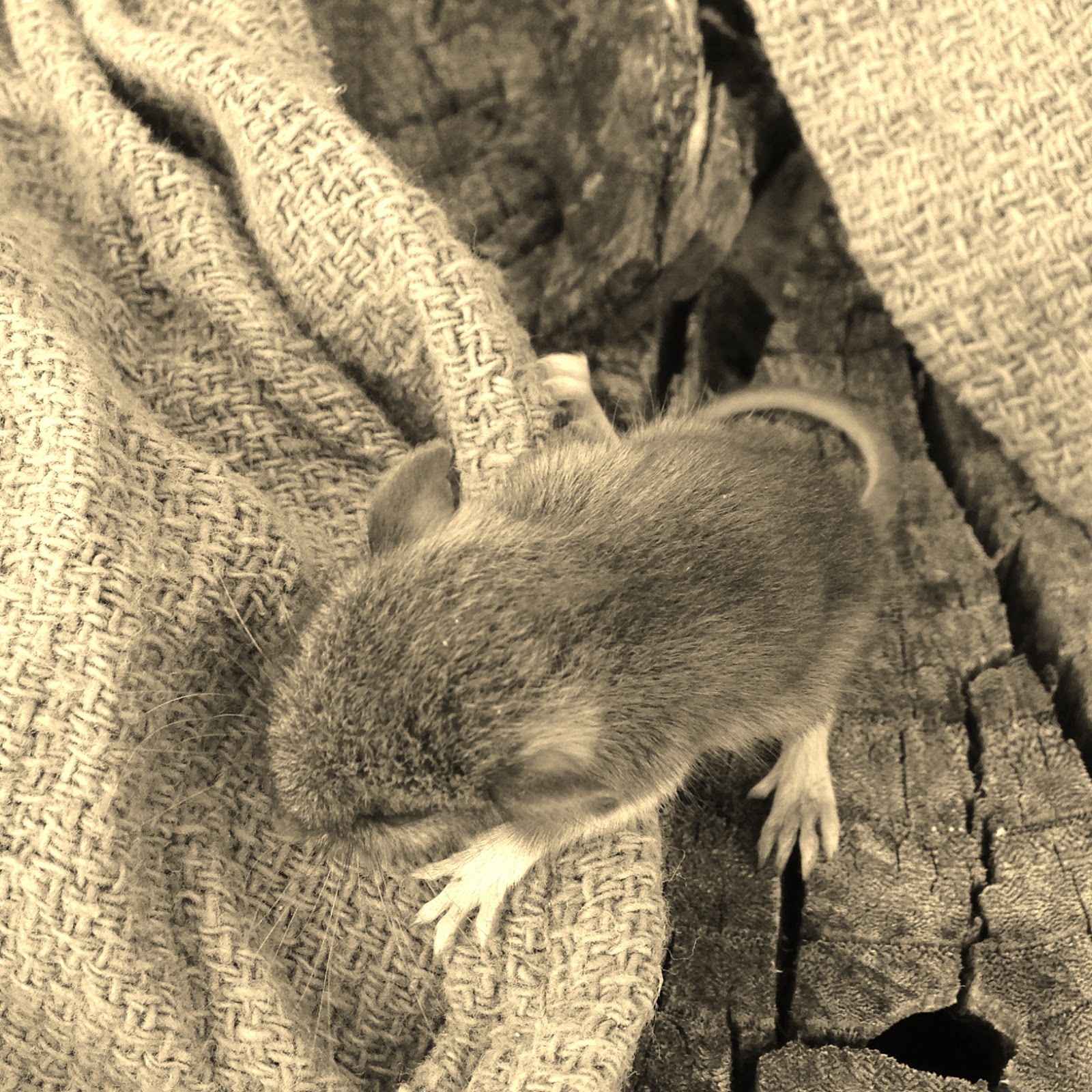 After I found the first snake and dispensed with him, removing his head from his body, I went on with my outdoor chores.

I grabbed up my pail of paint and headed to the fence that had been taken out by a camper and recently replaced. This fence is on the corner of the main road going to the full hook up sites, put there to prevent drivers from going into the deep ditch next to it. I painted it redwood stain, like everything else in the park, but am wondering if I should paint it neon yellow, glow in the dark ....
This is not the first time it has been hit, but it does prevent one from ending up with their wheels in the ditch and needing to be pulled out. I have adorned it with reflective lights ...... maybe I need more.

But, there I was, slathering paint on the new and old boards. I was required to step carefully on the back side to paint it. I was hyper-vigilant since the snake made his appearance. I saw what I thought to be a bird feather in the tall grass. Normally I would have pulled that weedy grass up, but figured it was preventing erosion and should just be treated to a good shave by the weed eater. I peered closer and thought I saw a face in the feather. I nearly lost my footing and decided to just slap the paint on the fence and get done.

But, curiosity won out and I took the shovel that had been used as a murder weapon on Mr. Snake and using it as a walking stick to maintain my balance, I got a lot closer.

A tiny mouse. whose eyes had yet to open was my "feather". I gently scooped him onto the shovel. Rolling onto his tiny back he squeaked and stretched his tiny arms out, no doubt looking for his mother. He was about the size of my thumb.
This time, He Who Mows, responded to my text and came to look at my find.

He told me to "kill it" before it grew up to raid a camper. It was easy to kill the snake, he threatened me. The tiny mouse, well, that was different. He was helpless, his eyes not yet open. He was cute, too. His head too big for his tiny body and limbs and he was making those squeaky noises again. I could feed him, and train him to be a good mouse. I could name him Stuart. After all, I did that for Martha, the boy cat.

Okay, that would be a problem, I admit. Not only Martha, but Oscar and Cujo. They were bred to eliminate rodents. So, I did not touch the mouse, or cuddle the mouse, or bath the mouse. 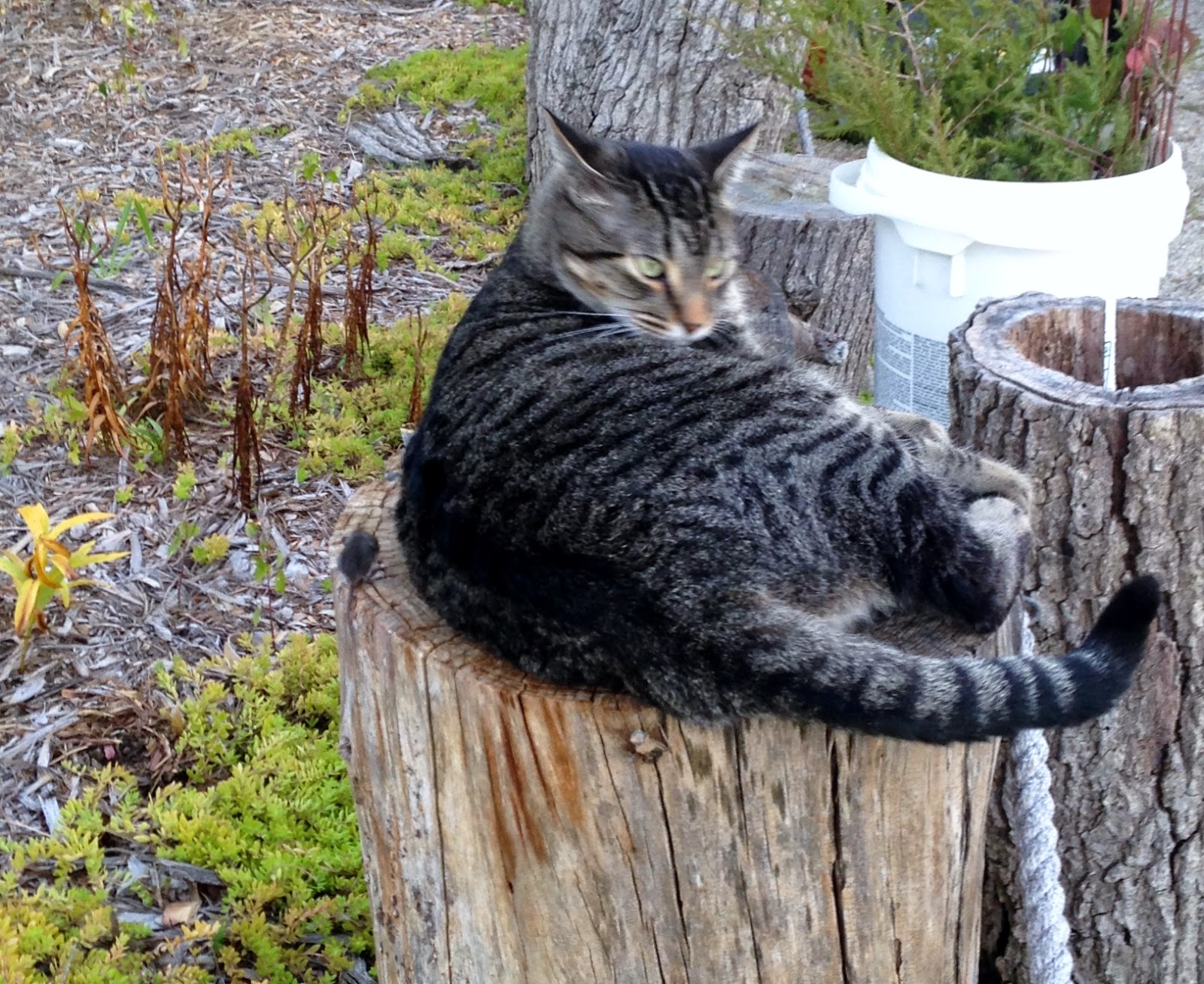 Instead, I gave the mouse to Martha, the boy cat. Martha, the squirrel hunter and rabbit hunter. Martha who killed a crow and left it on the lawn to find. This cat is fearless. Apparently, my gift was of little interest to Martha. That is the tiny mouse on the edge of the stump. Martha looked, then sniffed, then lay down with his back to the mouse I gifted him. 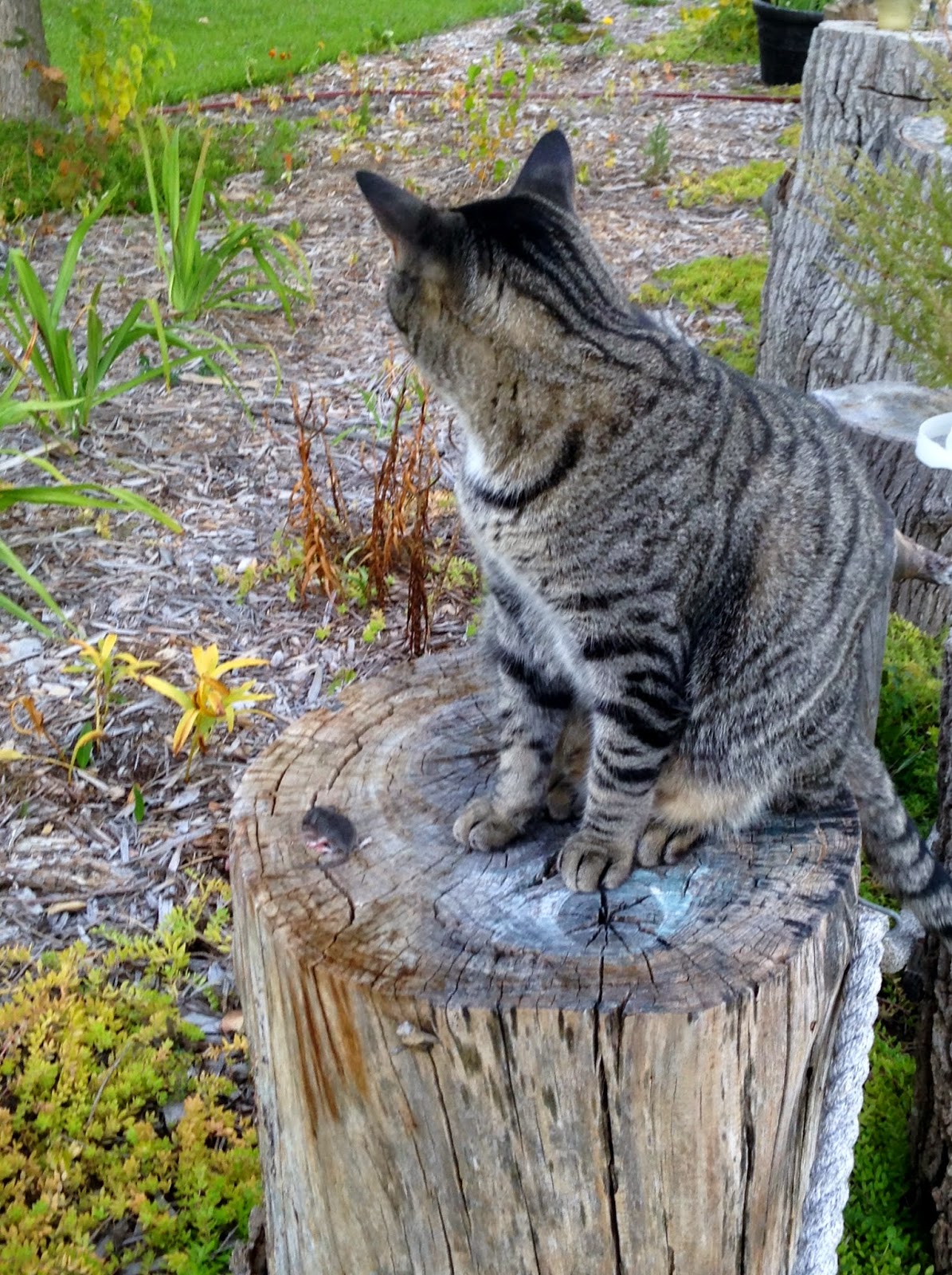 Could this cat possibly be less interested in the mouse? The mouse fell from the stump and died in the night, never touched by my picky cat.

I did say "first snake" didn't I? The second one still lives. A garter snake in my garden. A good snake. Perhaps I should have offered the mouse to him!

Posted by Kathy's Klothesline at 11:21 AM

You know if Martha had found the mouse on his own he would have been all over it.

You should have served it in an empty tuna can.

there was no thrill of the hunt, maybe that's the best part for the cat. stay safe.

Nobody tells a cat what to do. Or even offers a suggestion. A cat will do what a cat wants to do.

You were messing with mother nature...the snake would have snacked on the rodent :)

Our pet hamster got loose one time. We had two dachshunds [which you know what that means - "badger dogs" who hunt these things]. We were frantic to find him before Spot and Penny did.

Two days went by and we figure they had killed Hammy and disposed of the body. Nope, on the third day I found the two pups sitting side by side, Hammy the hamster between them being CLEANED by my dachshunds.

Yep the fierce hunters were trying to lick the poor thing to death. Hammy was enjoying the heck out of it. I was surprised he didn't stroke. I picked him up, laughing hysterically and gave him back to Wallene.

As for hamsters they are known to live less than three years. Ours? Lived to be almost 6 years old. I still miss the little guy.