We are home from our trip to Georgia. I won't say it was uneventful, but you would already assume that, …… I always have adventures.

We left in a flurry of snow, and when we drove out of the snow, the rain came and seemed to follow us all the way. It was dreary and overcast the entire time we were there. The sun stayed hidden until we were preparing to leave. We got a great start and were already through Atlanta by 11 am. HeWho speculated that we would make it home the same day.

We all know what happens when things are going great. The sun was still shining, what could possibly go wrong? I don't sit up front in the navigator's seat. I tried it and liked seeing
where we were. What I didn't like was the three dogs in my lap. We have a gate to contain them in the back, but the crying and howling is awful. I succumb to their pleas and unfold the sofa and we pile up together with a ton of pillows. They are happy, HeWho is happy, and other than being clueless as to where we are, it is quite comfortable.

So, there I was, an audio book talking in my ear and Jigidi on my laptop. I was into my puzzle, when suddenly the ride got really bumpy. I wondered if HeWho was taking a shortcut on some railroad tracks. Yep, a flat tire. We had to get it repaired and then they rotated the tires. The hardest part of this was finding a place. Siri needs to update her business info. She kept sending us to places that had closed down. 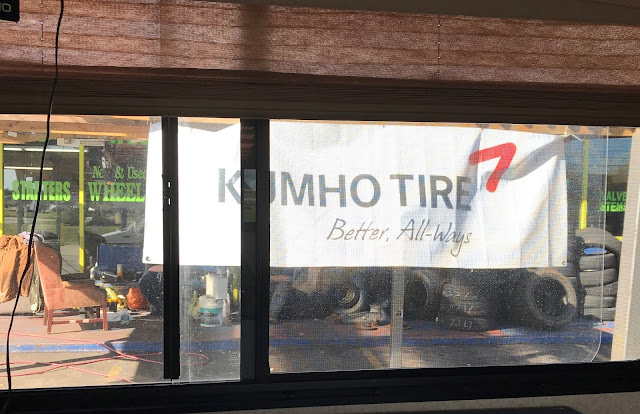 This is where we finally ended up with our flat tire. Still in Georgia. I ride with the shades down. Wall-E does not like to see all the cars and trucks on the roads around us. He is somewhat neurotic, my Wall-E. He also dislikes any changes to his routine. I am very accommodating to my pets. From the looks of the place, you know they were just a bunch of good old boys. They took the offending tire off and repaired it, then rotated the tires for a mere $55! And, it only took about an hour. I did not have to get out while they worked. A good thing, since the canines would have serenaded the work. 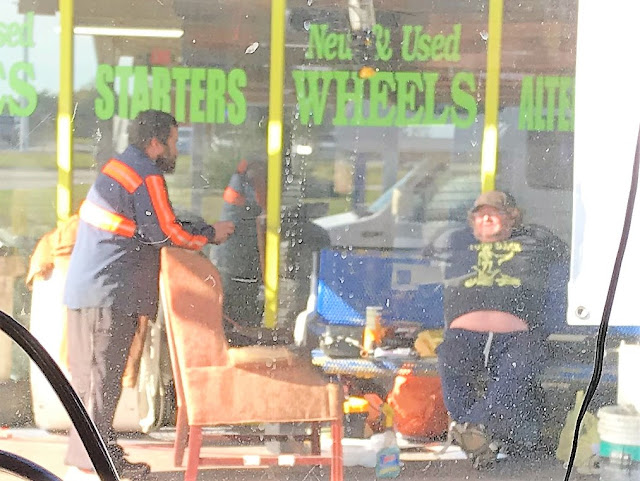 This was my view while I waited. The seated man did not get up the entire time. He stopped eating to talk the other gentleman in the photo. The talk was about 5 minutes long. Other than that he was eating. All that stuff on the bench next to him is junk food. Hard to see, as I took the picture through a screen and window. I thought it would be rude to get out and take his picture.

We were behind, for sure, but HeWho was sure he would pull into our park that same night. We did not make it home. We were still in the state of Georgia at 3:30. Engine lights came on. We had to drive slow until HeWho finally found a Walmart and got some gadget to "read" something or other. I have to admit that I did not pay attention to what he said. The plot was getting good in the book.

That fat guy looks like he doesn't have any arms in the picture. Weird effect. Reminds me of the time the alternator went out and the battery dies and at 3 AM Gavin up waiting for the AAA tow truck and checked into a motel, waking the poor night clerk.

Gosh! Where ARE his arms? Maybe he has his hands clasped behind his head, and we're seeing his folded up arms and elbows. Which could explain why he looks like he's wearing football shoulder pads. It's an optical illusion, like that old crone/young lady drawing!

At least you can never complain about being bored! Always something going on for you. Look forward to the next "episode"!

The others beat me to it, the seated man appears to have no arms. I was wondering how he managed to eat his junk food.