Using Boredom as an Advantage

Happy to say the Wi Fi has finally sped up a bit. I would read a blog, then try to comment ... and try ... and try. And then get a message that I was no longer on line. I am still having some problems, but not as bad.

In my utter frustration, I would give up and do something else. Hard to find the space to do much, confined to the indoors. I finally decided to re-do a wall that had been a thorn in my side, an eyesore, a travesty of interpretation by HeWho rarely hears what I say.

If I had a "before" picture, you would better understand ... When we decided to put up a wall in order to add additional retail space and eliminate what had been our living room, we were left with a really ugly wall. The wall had been an opening in the form of a door way to enter the living room and an opening adjacent to the door way that could have served as a window to maybe serve as a pass through for whatever  reason you might want a pass through from one small room to another.

The process of doing this was pretty unpleasant. HeWho usually goes about helping me with my projects somewhat begrudgingly. It was nice outside when we were working on this and he longed to be there and not stuck inside wielding his rudimentary construction skills on my behalf. He refused to use the sheetrock I had carefully salvaged from an earlier wall removal (hey, can I help it if I am good at this?), instead buying new material.

I may have mentioned before that he loves to go buy stuff. He will rarely measure anything or call to check availability before jumping in his truck and hooking up a trailer and hitting the road. This causes me much angst. I am a planner and enjoy much satisfaction in getting things done in an orderly fashion. But, I digress.

The saved sheetrock was the correct size, what he bought was not as thick. He had tossed my salvaged sheetrock and proceeded to use his thinner sheetrock to fill the openings. He proclaimed himself to be done with his part, leaving me with a bucket of sheetrock mud to "just fill it in". I was prepared to fill in gaps, but not to have to build it up to match the walls around his questionable construction. Leaving me wondering why I asked for his help, I attempted to "fix" it.

In the meantime, I just did my best and tried to hide the mess with lots of pictures and empty frames. It was okay until winter set in again and the endless days of being inside would find my eyes drawn to the wall imperfections. A few years later found us residing the building. It was clad in cedar. As the pile of discarded boards was stacking up, my mind was at work finding uses for the boards. HeWho was thinking of a bonfire, while I was squirreling away the valuable material. I knew that as long as it was out of his sight, it was safe.

As the next winter approached, I told the reluctant carpenter my plans. I was going to clean up the cedar and apply it to the ugly wall. "How are you going to cut the boards?" he asked. With the chop saw was my reply. I asked that he bring the saw and the nail gun up to the house so I could use it. "You will cut your fingers off!" This is his standard answer to my request to use the chop saw. My standard reply is "Only if I put them under the blade."

If you read my blog, you can probably guess what happened next. He waited until I was otherwise occupied and he slapped those boards up in his willy-nilly fashion, acting like he had done me a huge favor. I wish I had a 'before' picture. 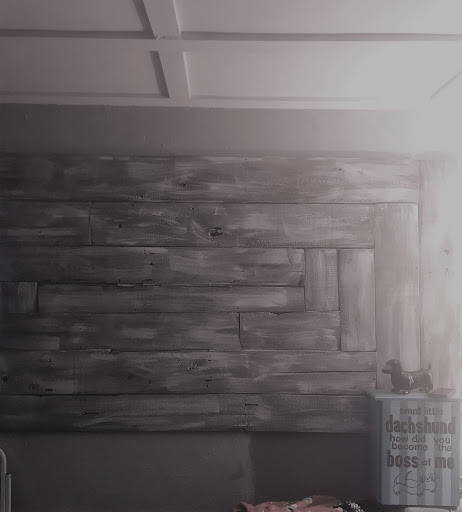 This is the 'after' picture. This has been my project to kill boredom. I am not finished. You can see that the bottom wall needs to be painted. I removed all the boards and pulled all the nails and trimmed off raw sides, then reapplied it to the wall using finishing nails and a hammer, rather than hunt down the compressor and nail gun. I am not good with a hammer, the weight of the hammer is hard on my arthritic thumb.

The canines were opposed to my renovation activity and the noise. The chop saw now resides in the laundry room on a rolling cart for my convenience. I try to time this usage to when HeWho has left the building. He tends to stand behind me like a saw stalker watching me work if he knows I am in there. You can't saw quietly. Then he will offer his expertise, which is not welcome!

I couldn't find a chisel, although I am sure we probably have 3 or 4 of them. His habit is to just buy a new one if he can't find the other one, his theory being than one cannot have too many tools. I improvised with a flat head screwdriver and hammer to trim the edges of the wood to make them more consistent in size, then I applied them to the wall, using the level I claimed as my very own and threatened bodily injury should it disappear.

I was hoping for minimal cuts to the wood and did pretty good using the materials at hand. I have more long boards outside ... covered in snow. Used what I had, then did a combination of a white wash/dry brush to lighten up the wood and make the darker boards blend with the lighter ones. I am pleased with my efforts, although my eye is drawn to any imperfections. 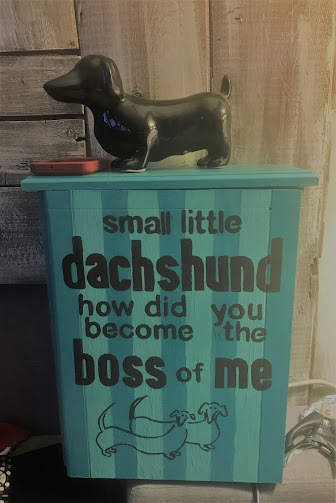 You may be wondering what this is. It was a drawer in a previous life. The drawer front on the top. A cabinet door was cut to fit by HeWho in the barn. The two pieces lingered for weeks after I painted them and had them ready for the hinges. The hinges are on the bottom. The door comes down and is used as a surface for my laptop. I drilled a hold in the back of the drawer to pull the electrical cord from a surge protector through. It sits inside and I can charge the laptop, my phone and have room for other cords if need be. It can be closed with the phone and the laptop inside. I am impressed with my own self!

Now I will need to paint. I am hoping to find the paint that matches the rest of the room somewhere in my many cans of paint. I hoard paint. When I am out shopping, I always head back to the paint department to check for "oops" cans that are discounted. I can usually use whatever color I find on some project. All depending upon the markdown. If it is cheap enough, I will buy some hideous mistakes the mixer made. I paint all the outdoor signs in the park and can use just about any color to prime with.

Boredom has it's advantages.

Posted by Kathy's Klothesline at 10:10 AM

I've been reading your blog for years. You amaze me with your creativity. It looks beautiful!

There are endless antidotes to boredom. Sadly, not everyone is good at finding them though. Unless one counts complaining. LOL.

Well done. Your posts are antidotes too. They're good medicine.

You could paint each one of those willy-nilly boards a different colour and make a feature of them, then maybe use it as a notice board.

You are quite talented. I love that sign/drawer. You are a tinkerer, for sure. But my guy is the same, he tells me I did a good job and then proceeds to tell me how HE would have done it.

I am impressed with your drawer that hides all sins (and ugly cords).

I like your finished product. If I hadn't read your post and knew the backstory I would think you put it up like that on purpose.

I like the wall AND your drawer cabinet, and am thrilled (though not surprised) that you still have all your fingers!

my husband is perfectly happy to let me do all the work. I stopped asking him to take care of things long ago.

The wall looks great! You two sound like the two people living in our house. That would be us.