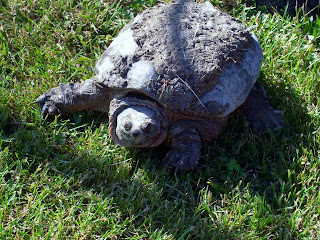 Meet Snapper. He was just roaming around the grounds as we started the Memorial Day weekend. He is covered in dried mud, giving him a prehistoric demeanor. Check out the size of those feet! 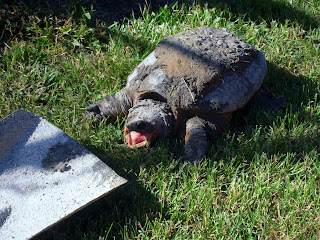 He Who has a tender heart for all creatures, even snakes (but definitely not muskrat), grabbed his trusty shovel to load Snapper onto his truck and give him a ride to the state park and the river.

Snapper proved to be a bit disagreeable about relocating, but we don't want him in our pond feeding on our delicate baby bass. 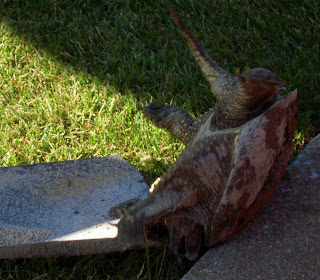 He even rolled over in an attempt to avoid the transport. When he started snapping his jaws together and I realized just how agile he was, I stopped taking pictures and moved out of his way. I did not know he could flip over and land on his feet! He looked like a four footed sumo wrestler in a very aggressive stance. I retreated to the office and left He Who catches snakes and such to deal with our unwanted guest.

Who is Sprint? You may be wondering about the title. Sprint is our Internet provider. Sprint promised to fix our problems and they did!!! I can download pictures and publish comments.
Posted by Kathy's Klothesline at 9:29 AM

Around here you see a lot of snapping turtles on the road. Well that's until some redneck picks it up in order to make it lunch :o)

Good luck relocating Snapper, and don't relocate Sprint! Glad you can get around again.

Whew! A couple years ago, we had one of those snappers on the faculty parking lot. I was leaving late, and saw him sitting there. I said to young Genius, "I wonder if he's alive." I poked his shell with the toe of my New Balance. YIKES! He was alive, all right. Took a tiny chunk out of my sole. They move lighting fast for a turtle! I think ours came out of the pond behind the school. Maybe gobbling up the worms that crawl out on the blacktop after a rain.

Sure that snapper turtle was not happy!
Take care
Kisses and hugs
Lorenza

WOW. I didn't know they could roll on their backs and then right themselves back. I came across a snapping turtle a few years ago. Yikes they are scary.

You have all kinds of animals and creatures wondering on your property! I wonder what will show up next?!!

I thought you had named your turtle Sprint:) We had a box turtle once that we named Speedy because he was always trying to escape and would dart to the back fence. My dad used to say if a snapper bit it wouldn't turn loose tillit thundered. That scared the heck out of me!