Cleaned Up and Puzzled 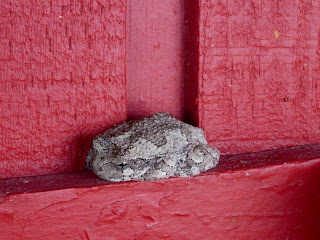 This little guy rode the storm out tucked in above the night drop box. He looks none the worse for it. 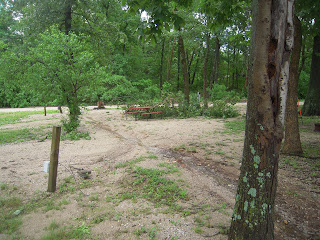 The swirling rain washed gravel everywhere. We had just had 4 loads brought in. 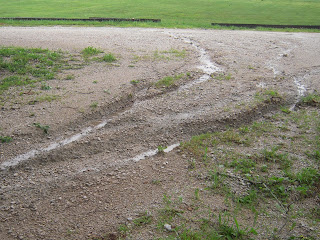 The rain thundered down and actually lifted railroad ties and created gullies in the sites and roads. 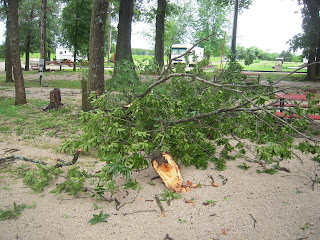 This site was common throughout the park. 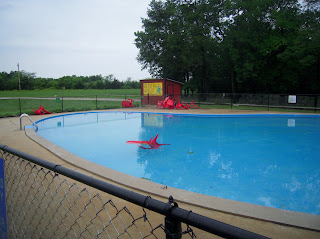 The pool chairs were blown around, but managed to stay inside the fence. 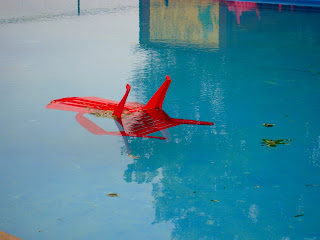 And in the pool.

It is mostly cleaned up now. Today was a perfect day. The temperature was mild and the sun was shining. I did the prep mowing, then spent the afternoon painting signs. I primed both sides and painted one side of each of the 7 new signs. Tomorrow I will get the other sides painted and then letter them on Wednesday.

I managed to get my laundry done and cooked, too! I am feeling very accomplished tonight.
Just one thing puzzled me today. Well, that's not quite true. I ponder many things in a day's time; but this one has me baffled.

While cleaning the bathrooms, I was initially annoyed at the bugs inside and muttered to myself about how difficult it must be to flip the light off and close the door. This is a running theme, though. Happens all the time. The mud puddle in front of the sink did little to thrill me. The trash can had a whole roll of paper towels in it. I dumped it into the liner from the men's room and noticed that the towels were all attached, but wet. Like someone pulled them all off the roll to use them to towel off with. You know, like they forgot to bring a towel.

I can usually figure out what may have happened and why .......... most of the time. But, as I scoured the sink I noticed something I have never encountered before. We recently replaced the faucet in this bathroom and I cannot begin to come up with a reason for someone removing the pieces that covers the top of the knobs, indicating hot and cold.

Were they planning to steal them for some bizarre craft project? Perhaps they simply wondered what was under them? No, I can think of no crafty thing to do with these innocuous disks that indicate hot and cold. They are clear and you can see through them, so no mystery to uncover. I am stumped!
Posted by Kathy's Klothesline at 10:09 PM

Unbelievable that someone would pop those hot cold discs. That puffed up frog is cute. My granddaughetr found one too and took a photo, and someone write that the frog looked upset. She responded, "That's because I've been hugging it."

When I saw your first picture I thought it was a rock. Wasn't until I read what you wrote that I knew it was some kind of animal (had to read Linda's comment to know it was a frog).....
Reading your comments about the bathrooms, makes me think it might be worth the investment to put in those automotive contraptions including motion detector lights, towel dispenser, water faucets, etc. Just for the fact that what it saves you in waste would pay for themselves in (insert time here).

I wonder how your sung little toad got to his perch.

Did you ever work in a high school? I'm guessing not or you wouldn't be asking the question about the faucet disks. Why? Because they could. What other reason would they need? Says the 15 year old boy.