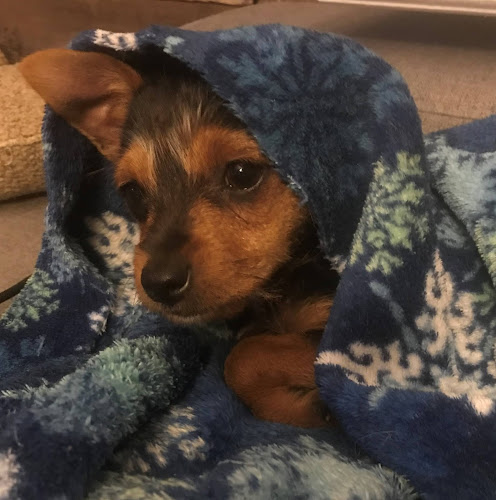 I am happy that I can finally download the pictures from my phone! So, here is my Mr. Bo Jangles. We learned that he was not fathered by the tiny Chihuahua we had thought. Turns out his father was a mix with Shitzu and Chihuahua. Just in case you might be unaware of this, puppy litters can have more than one father. Bo looks different than his litter mates. I suppose this makes him a mongrel.

He is one cute mongrel, don't you think? I was calling him a Chorkie, but that is not the case. I think I will just call him the cutest little dog in the world. His personality is one of high energy. I have a ton of toys bought for the dogs that came before him. They were not much interested in them unless they contained a scoop of peanut butter. I try to keep them in a wire basket on the lowest shelf of a book case. Bo loves them. He begins his day with emptying that basket and dragging all the toys out. He is not interested in playing ball, except for the one that lights up. He is most intrigued with the stuffed toys and takes great pleasure in taking them apart and spreading the insides every where.

Several times a day I pick all the toys up and put the basket on the shelf, knowing he will be kept busy taking them out again. When he tires of growling and challenging the stuffed animals bigger than him, he will try to engage his pack mates in play. Toni will growl and try to remove herself from the room. Cujo remains in his favorite place, the couch where I normally sit. He will give a warning growl, then a good nip keeps him safe from puppy play. Eddie is his favorite playmate.

Eddie will get on the floor and play with him. This usually ends with a hurt yelp from Eddie when Bo is too rough .... never the other way around. Eddie is a gentle soul. Other than not playing ball, Bo reminds me of my Oscar. Overbearing and always in charge. Bo discovered yesterday that if he waits until Martha, the boy cat, stands up, he fits neatly under Martha's body, between his legs. He will move when Martha moves and Martha can't seem to rid himself of the creature under him! He finally had to jump over the gate to the bedroom to get away from Bo. It was like a big semi with a tiny sports car under it, both vehicles going the same speed. Bo is one smart puppy!

Enjoy the eye candy that Bo is. He is very photogenic. He has taken over my robe and likes to nap on it. Bo enjoys a good nap, he needs his sleep to be the busy little guy that he is. His fur is coarse, no longer puppy soft and he is still not cuddly, although he does seek me out when it is time to sleep. This picture is a few weeks old and every day finds more whiskers on him. He is already so cute I can't stand it!

Posted by Kathy's Klothesline at 9:14 AM

Oh my gosh! He is SO CUTE! I need to look out my window at my ugly unpainted white picket fence to clear my mental palate of cute overload, before I go into a coma!

How do you dealk with so much cuteness. I would have this little one spoiled in no time. You are a good fur baby mama. They are all lucky to have you.

Bo looks SO MUCH like my Squirt! Except Squirt has lighter hair on top. Their personalities are similar, too. Squirt has toys strewn all over the house AND yard. Since we have doggie doors, he is free to take toys out. Really interesting the different personalities of dogs. His brother is never the one to get out a toy. They do have some really fierce Tug-o-wars fairly regularly, though. You have to have the patience of a saint to deal with the public, It's a good thing you have your fur babies, and your gardens.

Can you hear me laughing with delight at the image of Bo walking under Martha? He's so clever and very cute :)