I am feeling better. Not 100%, but much better. So much so that I spent an hour and a half in the dentist chair to be fitted for my new crown. This will be three .... so I must be a queen by now!

While I was feeling crappy, I slept a lot. Eddie and Cujo were happy to nap with me, leaving Bo and Tony Louise to help HeWho was in charge. I know I am sick when I no longer care about mistakes that could be made with reservations.

Except for not dating registrations or reservations, he did okay. He would put the days of the month that the reservation was for, but not which month. Upon questioning, he would say, "I don't know, they said those days." He put the reservation on whatever page was open and clearly marked at the top. No phone number for me to call and say to the person, "I am sorry, but my husband is an idiot ...." Only time will tell, as I pencil it in on this month and October. HeWho likes to create challenges for me! Keeps me sharp minded.

The weather is my favorite kind. The grass is not growing as fast, freeing up more time for painting fences. I paint awhile, then while that dries, I clip back dead stems from my gardens. At this rate I will have all my gardens ready for a long winter's nap. It is cool enough to plant small trees, as well and I have some baby maple trees on my agenda today. I discovered a tiny sycamore when I trimmed dead stems from a clump of Hosta yesterday. It needs to stay put until Spring. Then I will take up the Hosta, as well as the tree. I might take it to Minnesota if my daughter wants shade in her yard.

Mr. Bo Jangles is continuing to grow older, not bigger. He has proven to be quite the escape artist. He has learned how to gain momentum and slam himself into the screen door to go outside. The other dogs follow, while Martha, the boy cat looks on. Once outside he searches for any opening he can possibly enlarge. He will escape and the doxies will bark frantically to let us know the little stinker is out. It takes both of us and a treat to catch him. He can run like the wind.

I have screwed 2 X 4's to the bottom of the fence all the way around now. Last time he escaped he was determined to get back in the yard the same way he came out. He located his point of escape and was wriggling back under the fence, butt first when I grabbed him. Scolding him does nothing. He will just look at me with those bright eyes and turn his little head to one side. Reminds me so much of my Oscar, he would just stare at me until I finished my tirade, then walk away. The other dogs will hang their heads in shame. Bo knows no shame.

He has found his place on the sofa with me. He perches on my shoulder, watching my every move. He loves to watch the letters appear on the screen of the computer .... he also likes to walk across the keyboard. He is slowly learning to behave when on the sofa with me and I have to admit that I like the feel of him on my shoulder. He is still not very cuddly, preferring to be left alone when he sleeps. 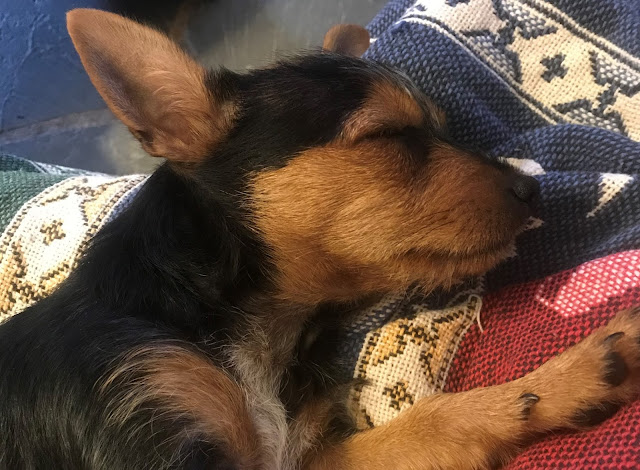 He looks like the pampered little guy that he is!

Posted by Kathy's Klothesline at 10:26 AM

Glad to know you are feeling better. Bo is a lucky little fellow to have come into your world.

Bo is quite the handsome little dude. I like pointy nosed dogs.

The cuteness is strong in that one! Bo must be some kind of dog-genius, to break back into the yard the exact same way he escaped!

Perhaps his name should be Houdini. He does look sweet sleeping there.