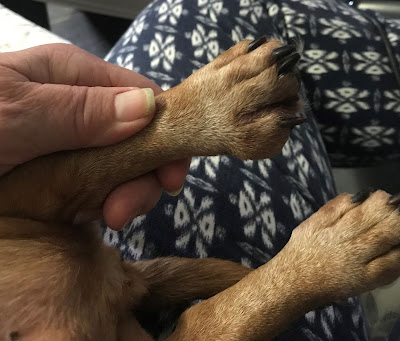 See my Cujo's fat toe? This is actually an after shot. I failed to get a before picture. He was hobbling around and looked so sad. I picked him up to launch an investigation and his poor little paw was hot and swollen. He let me stick my finger between his toes as I looked for a clue as to what had happened. I couldn't find a cut or any clue. I settled him in his favorite place …. next to me.

When he went out for night-night pee-pee time ( I sing a song to them and they know bedtime is approaching), he was only using three legs. Needless to say, I knew I would not sleep well worrying about my Cujo. 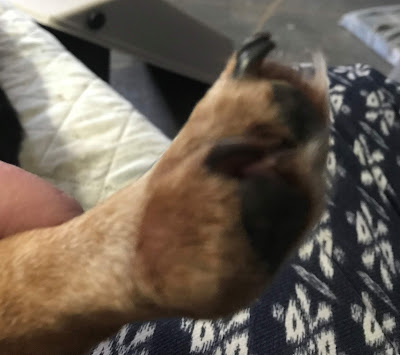 It looks so much better! He is bearing weight on it and acts like nothing is wrong. 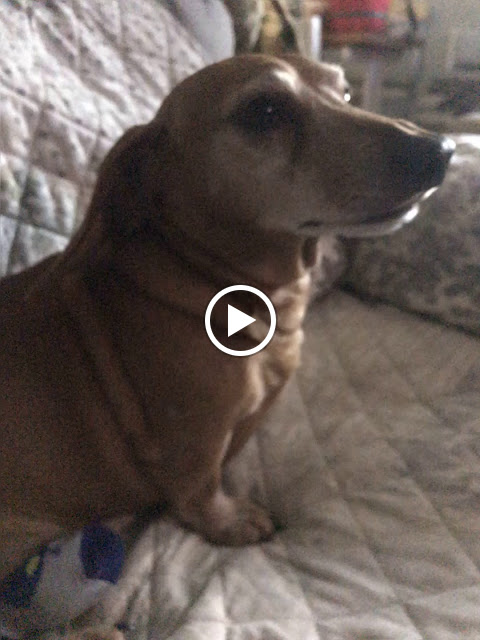 This is a picture from the night before. Just look at that face! He was saying, "Mommy, help me!" I cleaned it thoroughly and noticed  a break in the skin, making me think something might be in his toe. I put an excessive amount of  Prid (a drawing ointment), hoping it would make whatever in there surface.

But …. how to keep the ointment on the toe? Dogs lick, you know. Then I wondered what the ointment would do to him if he ate it. I knew he would just take a bandage off …. 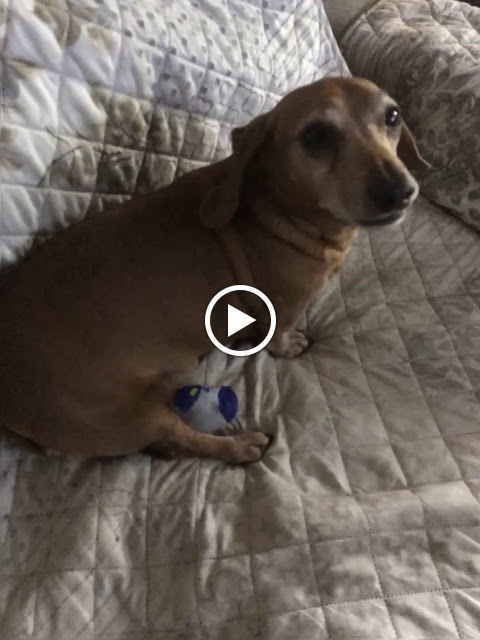 I wrapped it in gauze and then put a baby sock on his foot. Just look at that good boy! He attempted to take it off and I told him he couldn't. He left it on!! 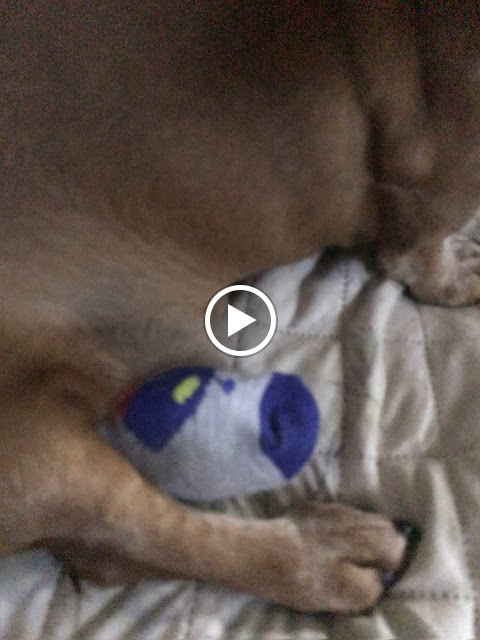 He left it on all night and this morning he can bear weight on his foot. He is such an obedient little guy. My heart just swells with love for him! I can barely stand it when any of my furry babies are sick. It was such a relief to see him walking this morning. I still don't know what made his little toe swell. Could have been a bee sting or he could have stepped on something, lodging it in his toe. The bandage held no evidence. A true mystery!

P.S. I can now see a bit mark on the side of his toe, looks like a wasp got him. I will be putting traps in my back yard! And, the freezer ..... a good cleaning and it works! Who knew I would be right?

Posted by Kathy's Klothesline at 1:38 PM

We knew you would be. Glad Cujo is better.

Cujo is such a good boy leaving the sock on his foot, he knew it was helping. He knows you care for him. I hope his toe is much better by now.

Poor little fur-baby! I guess a wasp sting is better than a snake bite. Such a good boy to leave on his baby sock!

My childhood miniature poodle put his nose in a shoe, and got stung by a scorpion. His snout swelled up quite a bit on one side, giving him a snarl look for about a day. I felt bad for him, but better his nose than my foot!

I had a cat once that got stung by a bee in his lip. His mouth swelled so big. Then he recovered fine. Hope your fur babies are fine as well. I was stung in the cheek by a hornet when I was in college and had to go to school looking like a monster to take a final, half my face normal, the other swollen beyond recognition.

that's what I was going to suggest, that he got stung by a wasp or a bee. same thing happened to my little dog.

Poor baby. I hope it heals