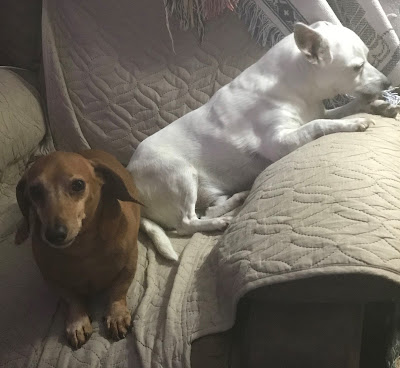 My four legged friends, Cujo and Wall-E. Cujo is my sweet little red boy. Very brave, as long as he is in my arms. He is around 9, not really sure, since he was a rescue. Already turning gray on his face and paws, he might be a tad overweight. He does love treats! Always by my side.

Wall-E is the white boy licking his paws. He is very anxious and has some issues. But, if I am sad or upset he knows it. He will sit next to me very quietly, occasionally putting a paw on me. His bark, though, will make your spine tingle. Hands down, the most annoying bark I have ever heard. He barks about everything and nothing. He is currently barking at the cat. A homely guy, but very tender hearted. He will let me do anything to him. I can pull his jaws apart and retrieve things I don't want him to have, look in his ears, but he will bite anyone who attempts to trim his nails. That being said, he has only bitten me once. He will snarl at me and warn me that I am in dangerous territory. I bite my dogs back. That is how the mother teaches the pups not to bite. Works for me. 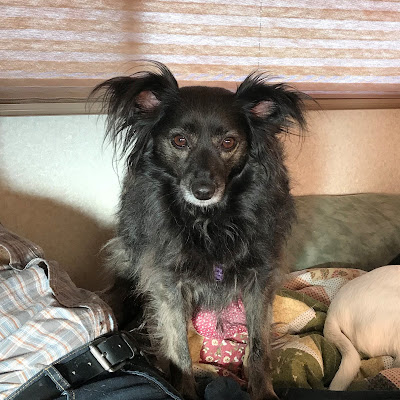 And here she is in all her glory. Toni Louise in her master's lap. Goofy looking girl, she came from the dog shelter. We don't know what she is or how old she is. Nine or ten is our best guess. Her fur is soft, but not as soft as Eddie's. She has no maternal instincts and she is the alpha of our pack. Oscar was the alpha for his entire life. No one ever challenged him. I knew that she would take his place. Cujo is too timid and Wall-E confided to me that he did not want the job. He gets anxious when I let him be in charge in my absence.

Today I spent a lot of time outside mowing and dealing with check-ins. Toni let me know she was not happy with me by peeing in my shoe. Lucky for me the shoe is washable. I rinsed my feet and flip flops outside and came in for a break. I was drying my feet when I heard the door and slipped on my other flip flops as I headed for the office to check a camper in. One shoe was very wet. I know it was her, as she seemed quite proud of herself as I squished by. Spiteful, she is spiteful! 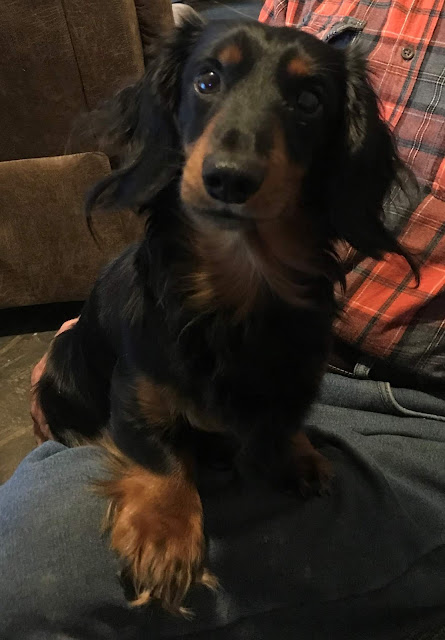 Charming Eddie is quite photogenic, don't you think? Just look at that face and tell me you are not in love! Eddie has a sweet disposition. He prefers me, but is okay with HeWho is the master of Toni Louise picking him up and petting him. He likes people and he likes to be the center of attention. 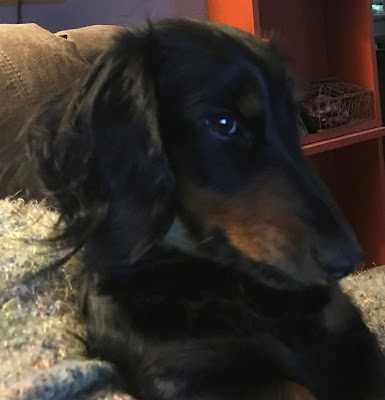 Eddie does have a sneaky side to him that is not so charming. He has started to challenge Toni Louise. He has many things in his favor. All the dogs love him and so does Martha, the boy cat. Toni Louise is feared by Wall-E, hated by Cujo, ignored by Martha, the boy cat. Cujo simply avoids her, but I have seen him jump on her if she gets too rough with Eddie. 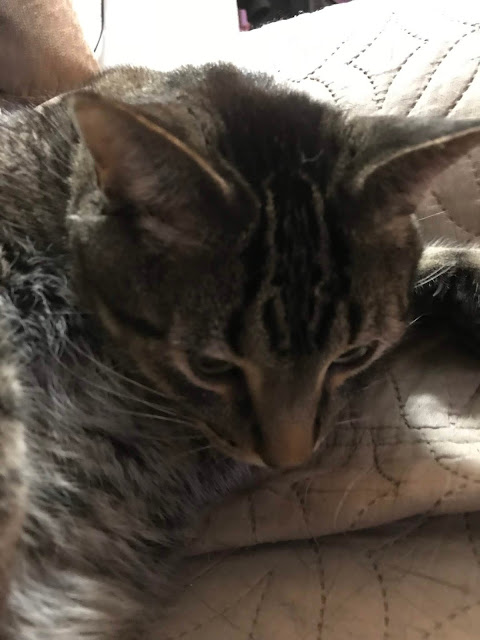 Martha, the boy cat is a force to be reckoned with. Martha is unaware of his status as a cat. He thinks Eddie is his puppy and I am pretty sure he thinks he is a human. He takes great pleasure in tormenting Toni Louise. He will roll around in the floor with Eddie and often I have seen him curled up next to Cujo or Wall-E asleep. He and Toni are rivals, though.

So for all of you who have never "met" my four legged babies, you can now put a face with the antics. Almost dark here and I have one small plot of grass to mow before I quit for the day. It is boggy and has to be done with the push mower. Rain is in the forecast and I want to knock it down before it starts to grow again.
Posted by Kathy's Klothesline at 8:53 AM

For a non fan with severe dander allergies, not bad.

Nice to meet your four legged family, Eddie looks like a dog I had as a child a dog named Lady that I loved

Thank you for obliging me!! Now when you tell stories about them, I won't have to search so far back to match names with faces! We have a five month old, five pound Yorkie that has me going in circles! When we got him, he was 3 months old. I don't think he had ever been outside. Am really having a hard time getting through to him that he need to go out for business!! He will be out for 30 minutes, then come in and pee, not on a pad, but on the carpet! The other issue is that he tries to taste/chew everything he sees. Mulch, dead worms, leaves, whatever. He is the fifth puppy I have "trained." Maybe my being older is making it harder? Have a good Sunday.

I think you just might have captured a glimpse of Eddie's sneaky side! I will give Toni Louise the benefit of the doubt, and say that you caught her on a bad hair day. She is smaller than my Juno, but their faces are quite similar.

Toni Louise has an interesting heritage I'd say, a little bit from just about everywhere. Now I can picture each one as you mention them since they are all different colours. Lots of cats think they are human, so Martha is no different. He looks exactly like the girl kitten, about four months old now, that lives in a flat across the driveway from mine.

Such a menagerie of lovebales. I had no idea you had a white dog. Those individual feline and canine personalities make for a fun time... peeing in your shoe. Sorry, I laughed. And Eddie has the side eye down. No wonder these fur babies own you. Thanks for giving us a glimpse.